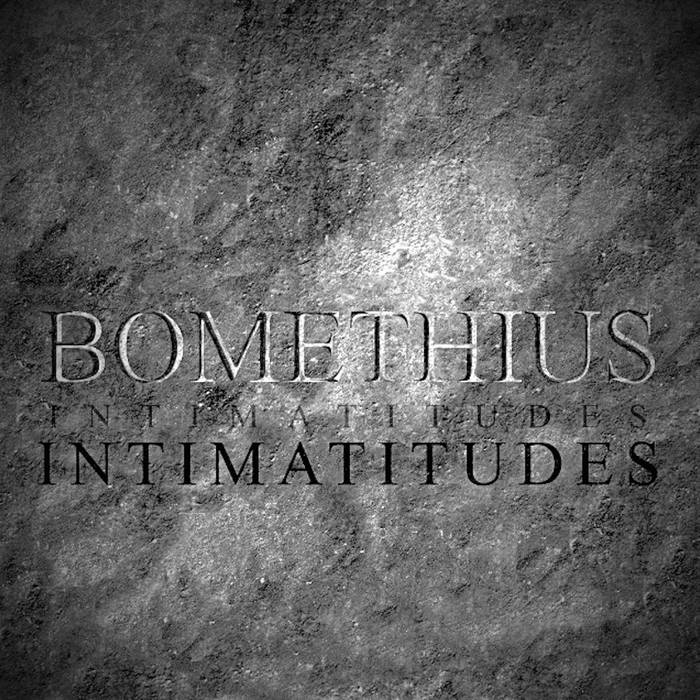 jeaster Really good vocals and instrumentals. Can't hum it but it is dark and catchy. Favorite track: Offensive.

An ambitious concept record about overcoming depression, Intimatitudes is the first full-length release from Bomethius, the lo-fi baroque pop alias of Jonathan Hodges, a Dallas-based composer and multi-instrumentalist.
A portmanteau of “intimate” and “attitudes,” the record melds Hodges’ indisputable chops and impressive musicality with a flair for wit to chronicle the internal turmoil of an earnest youth’s coming of age. Its 13 tracks comprise a series of vignettes that narrate an adolescent’s retreat from childhood hopes and convictions, followed by his ensuing journey — at turns pilgrimage and jihad — through the incoherence of contemplative life.

Recalling Brian Wilson’s “Our Prayer,” the record opens with “Empty Promises,” a wordless invocation of a cappella harmonies. Pleasant yet empty, the chords capture the bittersweet solace of youthful assurance — placeholders for the dulcet deceits well-meaning adults feed children.
A relentless spate of rage follows. Spurred by the anger, doubt, and violence that attend dashed dreams, Bomethius’ anti-hero adopts a panoply of musical styles to carry his increasingly transgressive complaints. Track by track, Intimatitudes’ first side traces his transition from sensitive soul to unstable victim (“HURTis”), insolent romantic (“IN-LAWS”), clever cynic (“Crapé Diem”), and beyond until he’s tied himself in knots.

A confessional ballad that doubles as an angry lullaby, “HURTis” belies the soft touches and undulating melody of a nocturne to evoke an inexpressible fury before the wailing violin and restless piano salvos of “Offensive” mutate into arrant contempt for respectability, family, and faith in the following tracks.

Having lost the thread, the wayfarer explores self-destruction and resignation in “The Kiwi Tree,” which employs deft musical parody to sketch the tortuous internal dialogue that attends early acts of rebellion. Further buried beneath layers of coping behaviors, his hold on identity eventually dissolves into the paranoid dissonance of “Look in the Mirror,” a jarring jumble of artfully disconnected layers and voices that sounds like a Brainticket rendition of an Andrew Bird song.

A cinematic paean to mortality and commitment, “Merried” doffs the sarcasm of earlier tracks to genuflect before the fear and trembling of a life lived amid pretensions and attempts. Foregoing the premature resolution of popular romance, his steps instead lead him to countenance, with poise and maturity this time, the radical isolation and indeterminacy at the heart of human experience — the slip and flux of selfhood, love, and purpose that affect everyone.

In “Merried,” understated vocals complement tight phrasing and solid imagery before plaintive guitar and keys shepherd a departed soul into the ether where tender flourishes peter out into awe and dread. Only as the youth learns to accept ignorance and incompleteness can he find the power to emerge from the pall and articulate a genuine hope in the coda, “Hope Springs Internal.”

While it considers familiar subject matter, Intimatitudes showcases Hodges’ formidable talents to great effect. The result is a spry meditation on the sorrows of growing up amid dogma and expectation with energy and zeal to spare — and a clear forerunner of greater things as this young talent continues to grow.

This album would not have come together in as coherent a manner if it were not for the invaluable criticism and support of Benjamin and David Hodges, Michael Mincough, Brandon Hicks (who graciously loaned his Taylor Acoustic which was used on the majority of the tracks), J. S. Easterman (Who provided the Ibanez Voyager used for the solo on 'Merried' and 'Hope Springs Internal'), Martin Lazo, Travis Carrol, Cynthia Gu, Dr. David Mead, and my parents. I am beyond grateful to each of them, (and many others) for the amount of time each of them has given to me and this project, and I look forward to reveling in the experiences I have had in bringing this album to fruition.

I want to credit Thomas Watterson as the teacher that convinced me that I had the ability to write.

I want to thank J. S. Easterman (responsible for the front cover), Martin Lazo (the back cover/track listing), and Hannah Thorp (developed the idea that became the back cover) for their artistic vision in bringing the artwork to life. While there were a lot of ideas that didn't make the cut, I never would have found "the cut" if it weren't for your willingness to try my terrible ideas. Thank you for bearing with me!

I specifically want to thank Benjamin Hodges for his willingness to contribute his own powerful and particular genius by crafting the promotional copy for this project. Our conversations at the beginning of this process were marked by a sincerity of depth and meaning that I hope only continues to grow with the years ahead. In the midst of his own chaotic and stressful life he made an incredible effort to guide and shepherd this project. It would not have been the same album without him.

Credit is also due to Alexander Lexington for producing the instrumental portion of "Heartbreak of Reality," and many thanks for graciously allowing me to use the track on this album.

The intonation issues on this album exist because of my own general incompetence, but wouldn't it be fun if they existed for the sole purpose of pissing off Dr. Mead?

Bomethius is the alter ego recording alias of Jonathan Hodges (b. 10-10-96), a Dallas based musician. An accomplished violinist, Hodges started studying music at age 3. Addressing doubts, fears, and disappointments from his own personal experience, Hodges recorded the first two Bomethius albums alone in his bathroom and quickly developed a unique baroque pop sound informed by melancholy, and wit. ... more

Bandcamp Daily  your guide to the world of Bandcamp

Benji B talks about his new compilation ‘Deviation Classics’